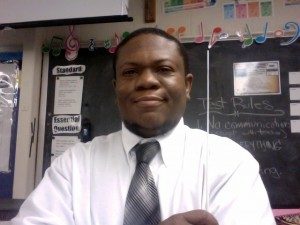 Kerry J. Gilliard (b. 1972), while a student at Bowie State University in the 90’s, spent extensive time writing and arranging music for the school’s then-48 piece marching band (which grew to over 180 pieces by 2001).  The Symphony of Soul in 2015, still plays music arranged and written by Mr. Gilliard almost a decade and a half ago. In early 2001, Mr. Gilliard went on to establish 7th Letter Music as an outgrowth of his many years of arranging for marching band.

Upon graduation he began working as a band and choir director in the Prince Georges’ County Public School System. Mr. Gilliard still produced music for Bowie’s marching and pep bands. During this time he also arranged music for small ensembles (vocal, instrumental and combinations of both). In 2005, he moved to the middle school level where he has exclusively conducted various band groups and has written music for small and large instrumental ensembles (read all of his Bio here). After ten years there, he moved to become to the instrumental music director at the neighboring high school, where he conducts two string orchestras, three concert bands, marching/pep band and jazz ensemble.

In mid-2010, Mr. Gilliard began putting things in place to enable him to resurrect 7th Letter Music and produce music on a consistent basis. 7th Letter Music/BluePhire Multimedia, LLC is incorporated in the State of MD.

We operate based on three fundamental principles:

• Make good music all the time.  We don’t believe in ‘educational music‘. All good music is both musical (contain multiple elements of music used well together in an aesthetically pleasing fashion) AND educational (teaches and reinforces the fundamentals of music) regardless of grade/difficulty level.

• Make copies of parts easily available.  Every copy of music purchased directly from 7th Letter Music is licensed to the school, organization or individual (your name appears at the bottom of the music). You get a PDF file of your music so you can print as many replacement copies of parts as you need. As long as you own/have purchased a legitimate copy (either purchased from JWPepper or directly from us), we have no issue with a director archiving a copy electronically.  Yes, this puts us at odds with the general printed music establishment. So be it.

• Make good supplemental resources so you can teach music well (not just teach songs). Musicianship involves all of the skills necessary to become a good musician. When a person becomes a good musician, he/she can easily learn songs. From posters to videos to worksheets (and soon textbooks), 7th Letter Music Publishing is seeking to be your one-stop-shop for good music and good resources to help players grow as musicians and conductors, directors and teachers grow as instructors.

We invite you to browse our catalog and purchase as new titles are being added regularly. In addition to music, we plan to become your one-stop destination for additional music education resources including workshops, video podcasts and much more. Be sure to sign up to our contact list so you can be notified when we post new material.

Our ultimate aim is to leave a legacy of good music for generations to come. Help us toward that goal by telling a friend or colleague about us.